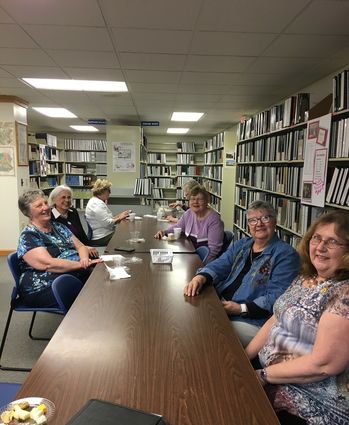 At the society's library: From the left and going up and around to the front right: Linda Fredrick, Anne Myers, Mary Ann Bennis, Janet Hanks, Agnes Kirsch, Elaine Conrad, Sharon Merritts.

Most everyone is curious about where they come from and use many sources to search for their family lineage such as Ancestry.com, newspaper clippings, the family bible and/or tree, or word of mouth. With a little bit of hard work and dedication, The Blair County Genealogical Society can help you discover your family history along with many other documents.

October 1979 is when it all started with an idea at a seminar entitled "American Genealogical Sources" at the Altoona Public Library. A couple weeks later on Nov. 15, 1979, nine ladies met for the first meeting which was held in the home of Margaret (Peggy) Fields. At that meeting, The Blair County Genealogical Society was formed. The next year was busy as the society members created their by-laws, with the first set being approved May 1980, receiving charter approval June 1980, designed and bought the logo stamp July 1980, and wrote the first society newsletter, published in September 1980. By August next year, the Society printed their first publication, "1846 Blair County Tax Records."

Over the next 20 years, the Society grew immensely. Leaving Peggy's home in 1980 to use rooms in the First United Methodist Church on 12th Avenue in Altoona, then moving in to an old classroom at St. Leo's School in 1983. By January 1999, the Society grew out of their space at St. Leo's School Building in Altoona, and moved into the former WHPA radio station building, naming it "Roller Hojeth Memorial Library", after Robert Roller, the man who helped purchase it, located on Scotch Valley Road in Hollidaysburg.

Celebrating their 25th Anniversary in October 2004, membership was at 679, had 128 publications, and nearly 4,000 rolls of microfilm. November 2019 boasted 40 years as a society, and 20 years in the Roller Hojeth Memorial Library.

Sharon Merritts, along with other society volunteers, led multiple tours of the library, stopping at each section describing how to use it. Sharon explained how, when looking up names, it could be confusing because of spelling differences or even complete name changes. One example, during the world wars, when a German came to the United States, he often wanted the blend in and not be identified as German. If he had the last name "Schwarz," he might change it to "Black" to hide the German lineage. (Schwarz translated to English means black.)

Sharon stated, "The written name is at the mercy of the bookkeeper." She also said, "Simply put, book learning was not the top priority. Being able to put a roof over your head and feed your family made you a successful man, but he might not be able to write his name. When the tax collector comes around, and asks the man's name, he writes what he hears. If a man has a lisp or accent, what the tax collector hears and writes might not be correct."

Tyler Price along with his mother, Stephanie, visited the open house.

Tyler stated, "It was our first time there. We just looked up surnames and some obituaries. I want to go back to search for the deed to my house and basically anything and everything else."

Stephanie said, "My son and I really enjoyed ourselves. All the volunteers were so kind and helpful. This was our first time but definitely not our last."

Harriett Gaston was there researching for her upcoming workshop titled "The Great Migration" It is about how African-Americans in the South were recruited by the Pennsylvania Railroad to come to the North including the Altoona area to fill jobs left empty by men who left to go to World War I. During her research, Harriett found many other interesting stories including how Chimney Rocks was part of the Underground Railroad, and that the first African-American judge in Pennsylvania lived in Altoona in the 1890s. 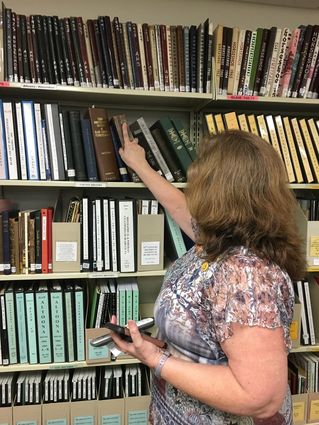 Sharon Merritts placing one of the older books back on the shelf. .

The Blair County Genealogical Society isn't just for finding out where your great grandparents came from. According to its website, the Blair County Genealogical Society was organized in 1979 and located in the Roller Hojeth Memorial Library is used exclusively for charitable, educational and scientific purposes. Its purpose is to compile, study and exchange information of a genealogical and historical nature and to preserve, perpetuate and publish the genealogical and historical heritage of the Blair County area for the benefit of its members, schools, and the general public.but also the history of our town, and who made it what it is today.

The library is always closed for the month of December, and is located at 431 Scotch Valley Rd in Hollidaysburg.