For the Love of Axel

W-burg Man and Community Come Together to Change Bulldog's Life 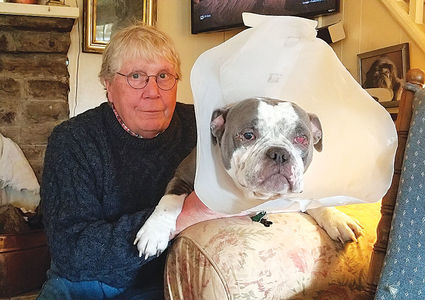 Jon McClintock and Axel have formed a special bond. Axel spent the first year of his life battling skin and eye disease before McClintock rescued him and got him the care he needed. After a recent eye surgery, Axel had to wear a cone. McClintock said Axel got used to the cone quickly and learned how to navigate through the house without much trouble.

If you stand in front of the old Charlie's Barber Shop in Williamsburg on any given day, you will see people walking their dogs around town.

During the summer months, the bench in front of Charlie's is a gathering place for old friends to sit and talk away the evening saying hello to passersby while giving their dogs a gentle pat on the head.

It was on one of these evenings last August that an American bulldog named Axel caught the eye of Jon McClintock.

What caught the attention of McClintock was the condition Axel seemed to be in. Unlike the other dogs that passed the barber shop, Axel...