By Brian Hess
For the Herald 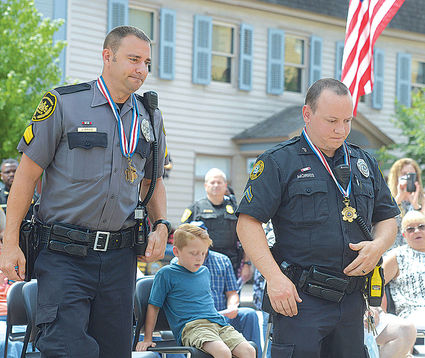 Martinsburg Sgt. Justin Davis (left) and Roaring Spring Cpl. Lance Morris were each presented with the Medal of Valor for their heroism during a ceremony on July 24 outside the Blair County Courthouse in Hollidaysburg.

Blair County Law Enforcement officials bestowed the Medal of Valor to two county police officers on Friday, June 24, in front of the courthouse in Hollidaysburg.

The Medal of Valor is the highest decoration for bravery exhibited by police officers in the United States, comparable to the military's Medal of Honor.

Blair County District Attorney Pete Weeks said both officers were involved in on-the-job shootings where they fired their weapons at individuals who could have shot them.

"The actions of both men protected the lives of many," Weeks said. "Both men put their lives in harms way."

After Weeks placed the Medal of Valor around each officer, the officers' wives pinned commendation bars to their husbands' uniforms.

"I am so thankful for the support from the community and my fellow officers," Sgt. Davis said following Friday's ceremony. "This recognition encourages us to do the best job we can as police officers."

Cpl. Morris said he was very appreciative of the support from the community and fellow officers.

"It's nice to be acknowledged for the job we do," the Roaring Spring officer said.

"Serving as a police officer is the toughest job in the country," Randy Feathers, Blair County District Attorney's Office detective, said. "We are all grateful for police officers and their families.

"These two officers were in the line of life and death."

While on patrol during the evening hours of February 26, 2020, Sgt. Davis observed a vehicle with a dead registration plate, and attempted to initiate a traffic stop within the parking lot of the Choice convenience store. Sgt. Davis activated his emergency lights on his marked cruiser. Willis Truman Irvin Clark, 32, of East Freedom, at this point accelerated at a high rate of speed and fled.

Sgt. Davis pursued the vehicle through the Borough of Martinsburg and continued the pursuit eastbound on State Route 164 for approximately 1.4 miles where speeds reached 100 mph within North Woodbury Township. While being pursued, the violator lost control and came to a final rest after striking a stop sign. The officer viewed the fleeing vehicle come to a stop after the accident, and observed the female occupant exit the vehicle and went around to the driver side and helped the male operator exit the vehicle. Both suspects fled the scene on foot.

Not knowing the danger, Sgt. Davis attempted to place both suspects under arrest with the officer deploying his taser on the female passenger, and continuing to pursue and apprehend the male suspect. While attempting to place the operator in custody, the officer then had to deal with the suspect pulling a handgun and pointing it at him. With the danger and a necessity of saving his own life, Sgt. Davis was forced to draw his service weapon and fire one shot into the suspect.

Sgt. Davis then secured the suspect's weapon and the female passenger and, while waiting for backup and an ambulance to arrive, retrieved the medical bag from the cruiser and was forced to provide first aid to save the life of the suspect.

Located inside the vehicle were numerous clear plastic baggies, unknown brown pills, two scales and approximately 15 grams of raw heroin. Police said these items are consistent with the distribution and sale of drugs and narcotics.

A pistol holder containing another magazine and .380-caliber rounds was located behind the driver's seat. The heroin was located inside the driver panel door. According to police, all items seized were within the reach of the driver of the vehicle.

Various drugs were seized from the incident, including additional heroin and suspected methamphetamine.

At approximately 4:16 on Friday afternoon, July 26, police were called to the parking lot on the area of the Dollar General store in Roaring Spring after the Blair County 911 Center received multiple calls of a man acting erratically.

Lt. Morris arrived on the scene to find Todd Messner, 49, of Three Springs, in the parking lot of the Roaring Spring True Value Department Store, 7565 Woodbury Pike, and attempted to make contact.

Investigators said Messner produced a handgun and raised it toward the officer, prompting the officer to fire his service weapon, striking Messner in the chest. Messner was pronounced dead at the scene.

Weeks said toxicology reports indicated Messner had methamphetamine in his blood at extremely high levels, which can cause erratic behavior and hallucinations.

Also on hand to recognize the two officers during the ceremony were Sheriff James Ott, on behalf of the Blair County Law Enforcement Officers Memorial Foundation; Phil Devorris, on behalf of Operation Our Town; state Sen. Judy Ward; state Rep. Jim Gregory; and a representative from Congressman John Joyce's office.

Sheriff Ott presented each officer with an award from the Blair County Law Enforcement Officers Memorial Foundation. Devorris also presented awards from Operation Our Town to each officer. 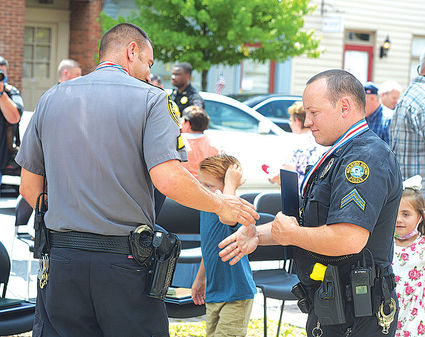 Martinsburg Sgt. Justin Davis (left) and Roaring Spring Cpl. Lance Morris congratulate each other at the conclusion of the Law Enforcement Medal of Valor ceremony.