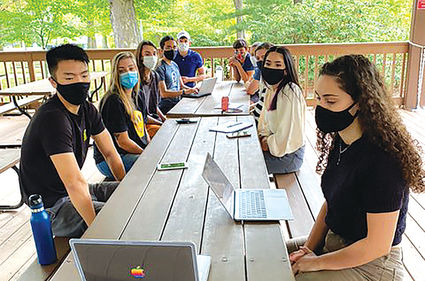 T.J. DeLuca, the president of Pennsylvania Young Democrats, was able to attend this meeting and inform the members of the organization and what is expected of them.

During this meeting, they elected an executive board, informed members of phone bank training sessions, and set goals for the next meeting.

The executive board of the Blair County Young Democrats consists of Madilyn Fulcherio as president, Vanessa Gil as vice president, Michael Schimminger as treasurer, and Helena Bassler as secretary.

Phone banking training sessions are run by Molly Rohrer, a field organizer for Blair County. She has helped the Young Democrats get started by giving them advice, providing them with resources and informing them of opportunities.

The goals set at this meeting were for everyone to recruit three other young democrats to the group. The Blair County Young Democrats communicate through the free app Slack. The overall goal for every member is to stay in good standing (attend three meetings or functions held by BYCD and volunteer for two campaign events sponsored by PAYD or BCYD).

To become a member, one must live in or be registered to vote in Blair County, and be younger than 40.

Anyone can get involved, no matter their age or voter registration status in Blair County. Many events hosted will be open to everyone and all meetings are open to everyone. Zoom meeting options will be available to those who desire it.

The next meeting will be held in mid-October at Penn State Altoona. A Zoom option will be available for those who reach out.

Those interested in becoming a member should contact Madilyn Fulcherio, by phone at (814) 935-3217 or by email at [email protected]