Are You in the Middle Class?

Study: Pa. Household Must Make At Least $25,757 To Reach the State's Middle Class 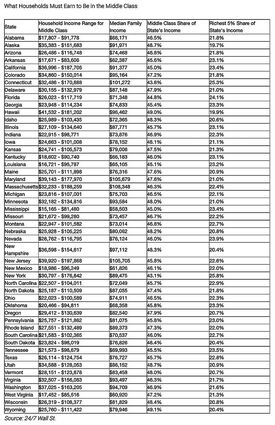 Social scientists use data from the U.S. Census to discover patterns in the lives of American families and their economic status. This chart shows the income range required for a household to be considered "middle class." The definition is based on median family income, which is the income in the middle of the whole range of reported incomes. This chart also shows the percentage of the state's entire income which goes to the middle class. For Pa., a household must have an income of $25,757 to $121,862 to be considered middle class. The middle income in the entire range of Pa. incomes is a household income of $81,075. The middle class in Pa. captures 45.8 percent of the state's total income. The richest five percent of Pa. households capture about half as much as the entire middle class, at 23 percent of the total state income. [Text and chart from The Center Square. Analysis by 24/7 Wall St. website, based on U.S. Census information.]

In Pennsylvania, households must earn a minimum of $25,757 per year to be considered middle class, with the upper earnings boundary set at $121,862, according to a new 24/7 Wall St. analysis.

The total share of household income in Pennsylvania controlled by middle-class earners is 45.8 percent, 24/7 Wall St. reports. In comparison, the share of income in the state controlled by the top 5 percent of earners was 23 percent.

To determine the income requirements of the middle class in each state, 24/7 Wall St. examined family income quintiles in the 2018 American Community Survey conducted by t...