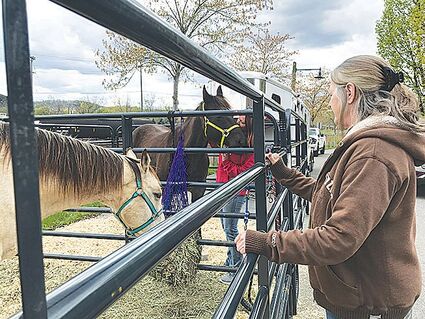 Sherri Rinehart (front) checks out Sandra Lee and Thomas O'Connor's horses from Fallentimber while Jessica Warner (back) pets one.

The U.S. Hotel and Stuckey Automotive sponsored the first-ever AdventureFest on April 18.

Donald Delozier, organizer of the event, said that because of everything that has happened in the past year, a lot of people want to be outside.

"I figured that we would focus on a lot of the things that are safe to do outside that's available around Hollidaysburg and the Blair County area," he said.

Delozier said that among the more than thirty vendors at the event were Central Blair Recreation Commission in Altoona and the The General Federation of Women's Clubs (GFWC) Hollidaysburg Area Women's Cl...