Lines Being Drawn in Battle over Fair Voting Districts in Pennsylvania 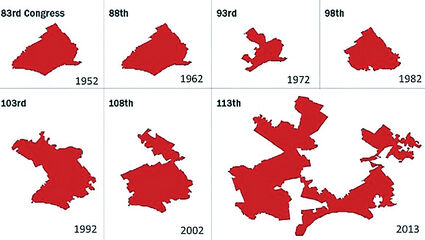 Fair Districts PA uses this example to show how, over time, districts are drawn to favor one party over another. This example above shows PA's 7th Congressional District changing over time. Sixty years ago, in 1952, it was a compact, logical shape. It was redrawn after each U.S. Census until 2018, when the Pa. Supreme Court declared the 2011 district maps to be unconstitutional. That is, they were "gerrymandered" to unfairly favor one political party. By 2013, the district had grown into a squiggle of lines contorting its way from Plymouth Meeting, north of Philadelphia, down to Kennett Square in Chester County, and then all the way over to parts of Lancaster County. This is the district's shape in 2013, shown above This district's nickname was "Goofy kicking Donald.") This was not a fair voting district. The district took on this odd, non-compact shape in order to unfairly capture more Republican voters and thus favor the Republican Party, as determined by the Pa. Supreme Court.

Gerrymandering, is the process of creating voting districts to try to guarantee that one party wins and the other party loses any election in the district.

The group wants to get Senate Bill 222 and House Bill 22, also known as the "Legislative and Congressional Redistricting Act," passed and in place in time to make a difference in the redistricting that will happen within the next year.

Fair Districts PA states on its website that it is "a nonpartisan, statewide co...