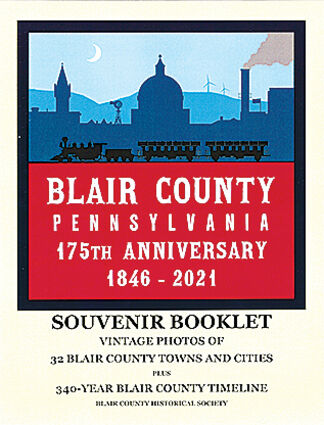 In celebration of the 175th anniversary of Blair County, the Blair County Historical Society, along with the county commissioners, has issued a souvenir booklet showcasing vintage photographs of 32 cities, towns and villages of Blair County including the Cove-area towns of Martinsburg, Roaring Spring, Williamsburg, Ore Hill, Royer, and Oremina.

The publication also includes a 340-year timeline of major events beginning in 1681 with William Penn's purchase of the land from native Americans.

The booklet is available at the Morrisons Cove Herald office in Martinsburg and the Roaring Spring True Value Hardware store as well as seven other locations throughout the county.

In addition to the souvenir booklet, the society has published a short history of John Blair, the county's namesake. At Baker Mansion, a recently acquired 1830s portrait of Susannah Blair Walker, the daughter of John Blair, is now on display. No known portrait of John Blair exists.

This is also the 175th anniversary of the groundbreaking for the Elias Baker Mansion, the society's headquarters in Altoona. It is open for tours throughout the summer and fall weekends Friday through Sunday, 11 a.m. until 3 p.m. All interior rooms have been restored to their original 1850 colors. The major rooms are furnished with original and period pieces, and include displays of clothing, dining, and leisure items of the time.

This year the mansion museum features exhibits of Little Italy in Altoona, Victorian women's sewing, cooking, ironing and other items of daily use; artifacts and photographs of the Korean War (taken by Altoona native Sgt. Ronald Mickel) at the armistice line in 1954 along with uniforms and other memorabilia.

This photo shows a painting of Martinsburg Public Square, which is featured in the souvenir booklet.

Also included in celebration, Royer Mansion, built in 1811-1830s in Williamsburg, will be open for tours on Saturday, August 28. The home has been restored to its original appearance.

In addition to Baker Mansion gift shop and the locations in Martinsburg and Roaring Spring, these souvenir booklets ($10) are available at Thompson's Drug Store, Chestnut Avenue Altoona and in Hollidaysburg; LaVintage Décor, 11th Avenue Altoona; Community Drug Store, Tyrone; Finds on the Hollidaysburg Diamond and the Bellwood-Antis Public Library.