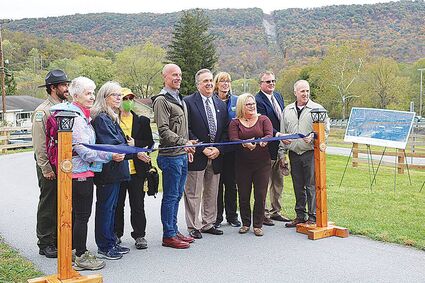 On Oct. 22, representatives from several state government agencies gathered to dedicate the new trail connector that joins the Lower Trail to Canoe Creek State Park. The connector extends the trail from the Flowing Springs trailhead to park property located on the northern side of Route 22.

Cindy Adams Dunn, Pennsylvania's Secretary of Conservation and Natural Resources was the keynote speaker. Secretary Dunn praised the efforts and cooperation of the organizations involved in the project, noting that connecting the park to the trail would provide access to clean restrooms, safe parking and overnight lodging for users of the Lower Trail.

Dunn said the state has a goal of having a trail located within ten minutes of all Pennsylvanians. Eighty-two percent of Pennsylvania's citizens already meet the criteria, and the state is trying to fill the gaps for those who don't. The Lower Trail to Canoe Creek gap was considered one of the top ten trail gaps in the state.

The Lower Trail runs approximately 17.5 miles from Alexandria to Canoe Creek State Park. The trail passes through Williamsburg and is a link in the Sept. 11 National Memorial Trail that connects the National Sept. 11 Memorial and Museum in New York City, the Pentagon Memorial in Arlington, Va., and the Flight 93 National Memorial in Somerset County, Pa.

Secretary Dunn said completion of the connection into Canoe Creek State Park would bring a "phenomenal" amount of tourism and visitation to the area. She said that the similar Great Allegheny Trail Passage in southwest Pennsylvania generates about $40 million for the trail towns located along its route.

There has also been a long-standing goal of putting parks within twenty-five miles of every resident. The boom in development of state parks in the 1970s and early 1980s means that those parks are now in need of repair of infrastructure. State Sen. Judy Ward (R-30th) praised the connection as a step toward making the park self-sufficient by generating income through cabin rentals and food concessions. Canoe Creek State Park currently has eight cabins available for rent and a seasonal concession stand. Ward called the trail and park "treasures" in the community. She said it is "important to give (DCNR) the resources they need to be able to be self-sufficient."

Also speaking was Keller Engineers, Inc. project manager Brian Wisor. Keller Engineers is the design consultant for DCNR on the project, and Wisor presented the plans for the next phase of trail construction within the park to join the new extension to an existing park trail. A new trail will be constructed along Beaver Dam Road and will parallel Rt. 22 to the pedestrian walkway at the bridge over Canoe Creek near the intersection at Turkey Valley Road. From there the trail will share the road with the highway at the bridge before meeting the existing park trail. Two bridges within the park that span Canoe Creek and New Creek will be replaced and upgraded. The trail will be hard surfaced to account for high water events. Three existing structures along Rt. 22 will be removed and the ground restored to a meadow habitat.

Thomas Prestach, regional manager at PennDOT, praised the Blair County Commissioners for their support of the construction of the half mile shared use trail that provides a safe route for trail users to reach the park. 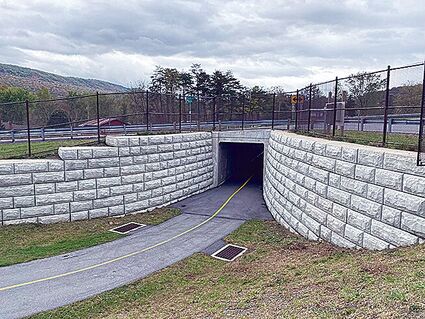 The Lower Trail extension runs parallel to a portion of Rt. 22 and crosses under the highway via a lighted underpass to emerge on Canoe Creek State Park property.

PennDOT previously improved Rt. 22 in the area by realigning the intersection at Route 22 and Route 1011 (Turkey Valley Road). The road was also widened to accommodate left-turn lanes at the reconstructed intersection. Beaver Dam Road was realigned and the intersection at Flowing Spring Road was reconstructed to allow for better visibility and access to Rt. 22. The Lower Trail extension was incorporated into the road improvement project. The trail extension runs parallel to a portion of Rt. 22 and crosses under the highway via a lighted underpass to emerge on park property.

At the conclusion of the dedication, Rails to Trails of Central Pa. officials and representatives of Friends of Canoe Creek jointly announced that the underpass would be named in memory of Terry Wentz. Wentz was one of the founding members of Rails to Trails of Central Pennsylvania and was instrumental in securing the funding to construct the Lower Trail. Wentz was the Park Manager at Canoe Creek, and envisioned connecting the trail to the park. Wentz passed away in 2010.

DCNR, Rails to Trails of Central PA, PennDOT, the Blair County Commissioners, Friends of Canoe Creek, and Frankstown Township were partners in the project.